So It Goes come to London

Not long until So It Goes reaches London!  We're on at Shoreditch Town Hall for two weeks, from Wednesday 8 April to Saturday 18 April (not including Sunday 12 but yes including all the other days, including Monday 13).

We're very excited.  Home crowd!  In fact, we've been singing "So It Goes is coming home" to the tune of "Football's coming home" for over a week now.

Email ThisBlogThis!Share to TwitterShare to FacebookShare to Pinterest
Labels: london, on the run, shoreditch town hall, so it goes

Starting Blocks at Camden People's Theatre... it's over, sadface

On Sunday, we performed about 30 minutes of brand new material at Camden People’s Theatre.  We’ve been developing new ideas there since January, as part of CPT’s Starting Blocks scheme.  We’ve also been meeting with the other artists on the scheme every Monday, to share our experiences of making work and to find out more about each other’s creative processes.

It was fun to perform and we’re excited about how the show might develop from here.  There are some big creative questions to answer, in terms of how we tell this story.  But we’re confident that it’s a good story to be telling and we have a clearer idea of why we’re telling it and the shape of it.

(I’m being deliberately non-specific here because I don’t like saying too much about a show before it’s finished!)

A heartfelt thanks to Camden People’s Theatre and our fellow Starting Blockers. The outpouring of grief and affection following the fire at Battersea Arts Centre has been extremely touching.  Much has been said about BAC’s importance; these pieces by Dan Rebellato and Catherine Love are particularly eloquent.

My first visit to BAC was to see 1927’s debut show Between The Devil And The Deep Blue Sea.   I didn’t live in London and travelling alone, with no understanding of London’s geography, meant the tube and bus journey required to get from King’s Cross to Battersea was quite an undertaking.  But that simply added to the sense of adventure and overwhelming excitement when I finally arrived.  I was wide-eyed as I entered that stunning building.  What a building and what a show.  I came back a week later to see it again.

When I put on my first proper show, Machines For Living, less than a year after leaving drama school, I invited every single theatre in London and beyond.  Only one replied.  BAC sent someone to see it.  When Hannah and I did a work in progress performance of So It Goes, we invited everyone we could think of.  BAC were the only people who came. For years, I knew that it was a place where people a few years older than me had got their first gigs.  I’d known it was a place who wouldn’t turn me away because my process didn’t start with a script. When that place sent someone to see my work, it meant the world.  And they were the only ones who did.

BAC are fundraising to allow them to rebuild and keep doing what they do so well.  You can donate here. 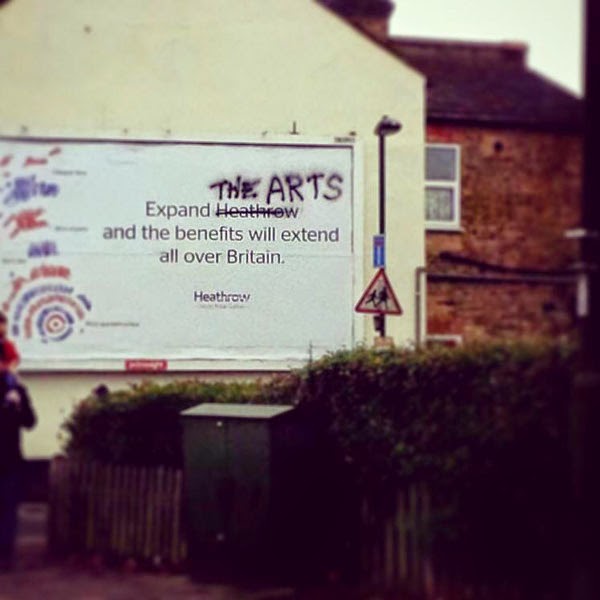 It’s been a busy week for On The Run.  Our tour of So It Goes began with performances in Ormskirk and Canterbury.  We had a fantastic time, thanks to lovely audiences and very friendly staff at both venues. We’re having a great time on the road and it’s a real pleasure to be performing the show again, after a six month hiatus.  We’ve got a week off now, before we head to Halifax, Leeds and Ipswich on 25, 26 and 27 of March.

I’ve just come back from a fascinating Q&A with Green Party Leader Natalie Bennett, held at Camden People’s Theatre and attended by artists and producers keen to hear more about Green Party policy on the arts.  I sensed, amongst the audience, a desire to be idealistic, to imagine what the arts could be and the role they could play in a different kind of society, but also a difficulty in imagining any world in which our post-1980s economic consensus could be overturned.

In an age of austerity, it seems that the national conversation is never about the best public services, or arts policy, only the cheapest.  Amber, from CPT, pointed out that this means conversations amongst artists often descend into panic over already meagre funding levels going up or down by a few percent, which can prevent us from thinking big.  One person summed it up brilliantly: “When financiers get together, they talk about art; when artists get together they talk about money”.

I felt a little sad that we couldn’t allow ourselves to think big and be idealistic, in a conversation about Green arts policy.  What are the Greens for, if not idealism?   But some of the best suggestions for policy changes were small but significant ways in which government could grease the wheels of arts organisations, for example by offering to tax breaks to philanthropists willing to fund the arts or cutting business rates for arts organisations.  My own plea was for government funding bodies to stop asking arts organisations to single-handedly cure all social ills through arts participation, in return for their funding.  On this, the Greens cannot be accused of not thinking big as their Universal Basic Income would automatically create a fairer society and one in which more people had time to enjoy the arts.  Whether or not that’s realistic is another question.

In the context of this discussion, the announcement this week that IdeasTap will be closing seems particularly depressing.  It was not financially sustainable and didn’t manage to find a way it could be (not for lack of trying, I’m absolutely sure) but it did give us a vision of how young artists could be helped along in their careers.  In a different world, IdeasTap would be an extension of the Arts Council and publically funded.

Hannah and I ran two workshops for IdeasTap members and got a huge amount out of both of them.  We met new people, we shared approaches and skills we’d developed in our creative practice and we had chance to tell people about our work.  We’ve also run workshop in conjunction with our friends Rhum and Clay Theatre Company and the money we’ve been paid to do this has partly funded our regular night of short form work, No SuchThing.

Our Designer Emma Tompkins once told me that when she runs skills or career workshops outside London, often in places where young people with bags of talent feel geographically isolated or just don’t know how to get a career moving, her biggest piece of advice was, “Join IdeasTap.”  IdeasTap funded projects but more than that, it was a way of people connecting and it was full of helpful advice which, crucially, you could access whoever you were, wherever you were.  I’m sad to see it go.

On a happier note, Incoming Festival announced its line-up this afternoon and we’re on it!  We’ve been sitting on this news for a while so it’s great to be able to start shouting about it.  It’s a festival we’re really excited to be part of and it’s always nice to be back at the New Diorama Theatre, home of No Such Thing.  We’re performing alongside some good friends, including Little Soldier, Rhum and Clay, Remote Control and Sh!t Theatre.  We’ll see as much as we can, so I’m sure we’ll discover some new favourite artists there too.

Incoming Festival runs from 1-10 June and we’re performing So It Goes on 2 June.  Full festival line-up and tickets here.  Head to our website for all the So It Goes tour dates.

So It Goes tour starts soon!

We hit the road next week!

We can’t wait to take the show far and wide.  It’s such a pleasure to get it back on its feet having only performed it once since we premiered in Edinburgh last August.

Full tour dates, info and links to buy tickets HERE.  If you’ve seen the show already, do spread the word.  If not, we hope to see you at a show soon!

Email ThisBlogThis!Share to TwitterShare to FacebookShare to Pinterest
Labels: on the run, so it goes, tour
Newer Posts Older Posts Home
Subscribe to: Posts (Atom)