LIGHTYEAR: one of my favourite ska punk bands.
The onstage nudity is pretty typical.

Over the past few weeks, Hannah and I have been working on a new show, rehearsing once or twice a week, with help from Camden People’s Theatre’s Starting Blocks scheme.

The show is about a relationship I had when I was fifteen. It was the first time I’d fallen in love and it was wildly exiting and often euphoric.  But I spent a lot of time struggling with the fact that this girl  (who we’re calling ‘Kate’) was both anorexic and bulimic.

In lots of respects, it’s been a pleasure to revisit my teenage years because, generally, I was pretty happy.  We’ve been digging out the records I listened to – mainly raucous ska punk – and they still sound great.  We’re trying to use some of it in the show, although it can be hard to keep up with the riotous shouting and thrash drumming!

I’ve been reading my teenage diary, which is horrific. It seems amazing that I didn’t know at the time how much I sounded like Adrian Mole.  This morning, I found ‘poems’ scrawled in the back pages.  (‘Over-written’ doesn’t really being to cover it.)  What’s remarkable is the sheer intensity of emotion.  Two out of three sentences end in an exclamation mark.  I use the word ‘WOW’ excessively.  The pages are a riot of capital letters and emphatic underlinings, veering in an instant from euphoria to rage to utter banality.  This resonates with my memories of that relationship.  Joy.  Worry.  Fury.  Frustration.  Repentance.  Love.  Joy again.  Often, all before 8.45am, when school started.

We’re lost in the middle of all that right now, with a ska punk soundtrack of power chords and trumpets in the background.  We are looking for the right form to express that feeling.  That time when, according to my diary, all I did all day was FEEL.  We haven’t found it yet because we’re still lost.  But lost is often the most exhilarating part of the process.

As tends to be the case with our work, we don’t have a fixed deadline for opening the show.  But we’ll be sharing some of the new material at CPT’s SPRINT Festival, along with the other fantastic Starting Blocks artists, on March 29.  Tickets are available here. 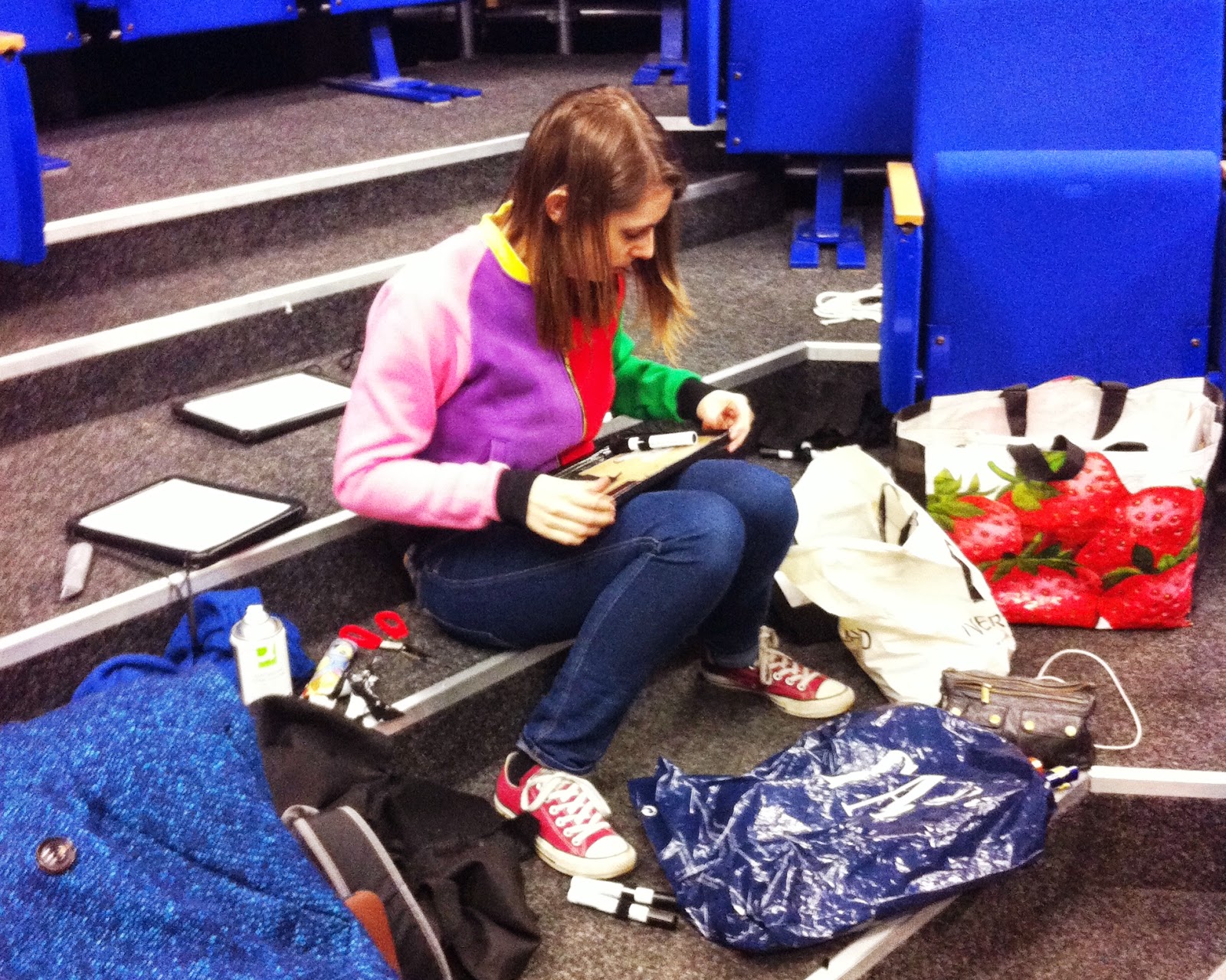 Hannah drowning in whiteboards, at The Omnibus this week

Thanks to everyone who came to see So It Goes at The Omnibus in Clapham.  It was great fun to perform the show again and The Omnibus really is a lovely venue to work at.  Do check it out if you haven't already.

So It Goes will be heading on tour in March, with performances all over the UK until June.  Head to our Tour page for all the dates and links to box office.  Tickets for our London run at The Shoreditch Town Hall (8-18 April) have just gone on sale.

We've been busy working on a new show, with help from Camden People's Theatre's Starting Blocks scheme.  The highlight is always our weekly meeting with the other artists taking part, when we discuss how our projects are going and hear about the other artists' processes.  It's both fascinating to hear about the work and uplifting to have made new friends and to gain an insight into other people's work.

We'll be sharing new material at a work-in-progress performance, alongside all the other Starting Blocks artists, on the last day of CPT's SPRINT Festival (March 29).  Tickets are on sale here.  Do check out the rest of the festival programme, as there's loads of good stuff on.

We went to see Islands by Caroline Horton at the weekend, the bouffon show about tax havens which has caused a stir.  Caroline is a really influential theatre-maker for us and we loved Islands.  I ranted a little on Twitter over the weekend about how sad it was that certain critics were too lazy to judge it on its own merits.  (They are allowed to not like it, by the way, but merely dismissing it or implying 'it's not a proper play' is contemptible.)  But three cheers for the bloggers.  This review by Stewart Pringle and this by Andrew Haydon are PROPER pieces of writing which engage properly with the show and, in both cases, put it into some broader context.

Tim Walker wrote recently, in a dull-witted swipe at the online community, "who, honestly, can name an internet critic who has the authority of, say the Guardian's Michael Billington?"  The critical response to Islands seems to demonstrate that mainstream critics are not just the victims of a general move to digital journalism, but of their own self-inflicted irrelevance, ignorance and laziness.

Islands is on until 21 February at The Bush.  I recommend it heartily.


Furthermore, any critic who puts sarcastic inverted commas on the phrase 'a devising process' should be banned from profession.#IslandsPlay
— On The Run (@ontheruntheatre) February 1, 2015